Creative Content Australia has released its annual Piracy Behaviours and Attitudes research and the findings reveal the environment of the last two years has supported a reduction in piracy behaviour, but now is not the time for complacency.

The pandemic has undoubtedly driven changes in many different behaviours but it remains uncertain as to which new ways of living will endure and which will return to where we were in 2019. It’s impossible to know what the situation would be had COVID-19 not happened and so we cannot say with certainty what has been caused by events of the last two years and what would have occurred in a pandemic-free world. In turn, it is difficult to predict with certainty whether the trends we are seeing in viewing behaviours, legal and illegal, are indicative of what will continue in the future or if they represent a moment in time before pre-pandemic patterns resume.

Fortunately, the CCA research programme has steadily tracked consumer behaviours and attitudes in relation to piracy since 2008 through a consistent and robust annual survey, augmented by secondary data analysis, and further qualitative and observational research. This wealth of data has enabled them to identify signals and patterns over time and make informed hypotheses as to the behaviours that are likely here to stay.

The most recent research wave (conducted by Screen Audience Research Australia (SARA) at the end of 2021) shows some very encouraging signs. The data reveals legal viewing was at an all-time high with significant increases in legal streaming incidence and frequency of movies and TV shows for both adults and teens. What is even more encouraging is that this has been accompanied by a decrease in active piracy from 25% to 21% of Australian adults. Better still, the decrease seems to be largely driven by a reduction in those who tend to pirate at the highest degree of frequency (what we term the ‘persistent pirates’). Teens show a similar pattern of decline. 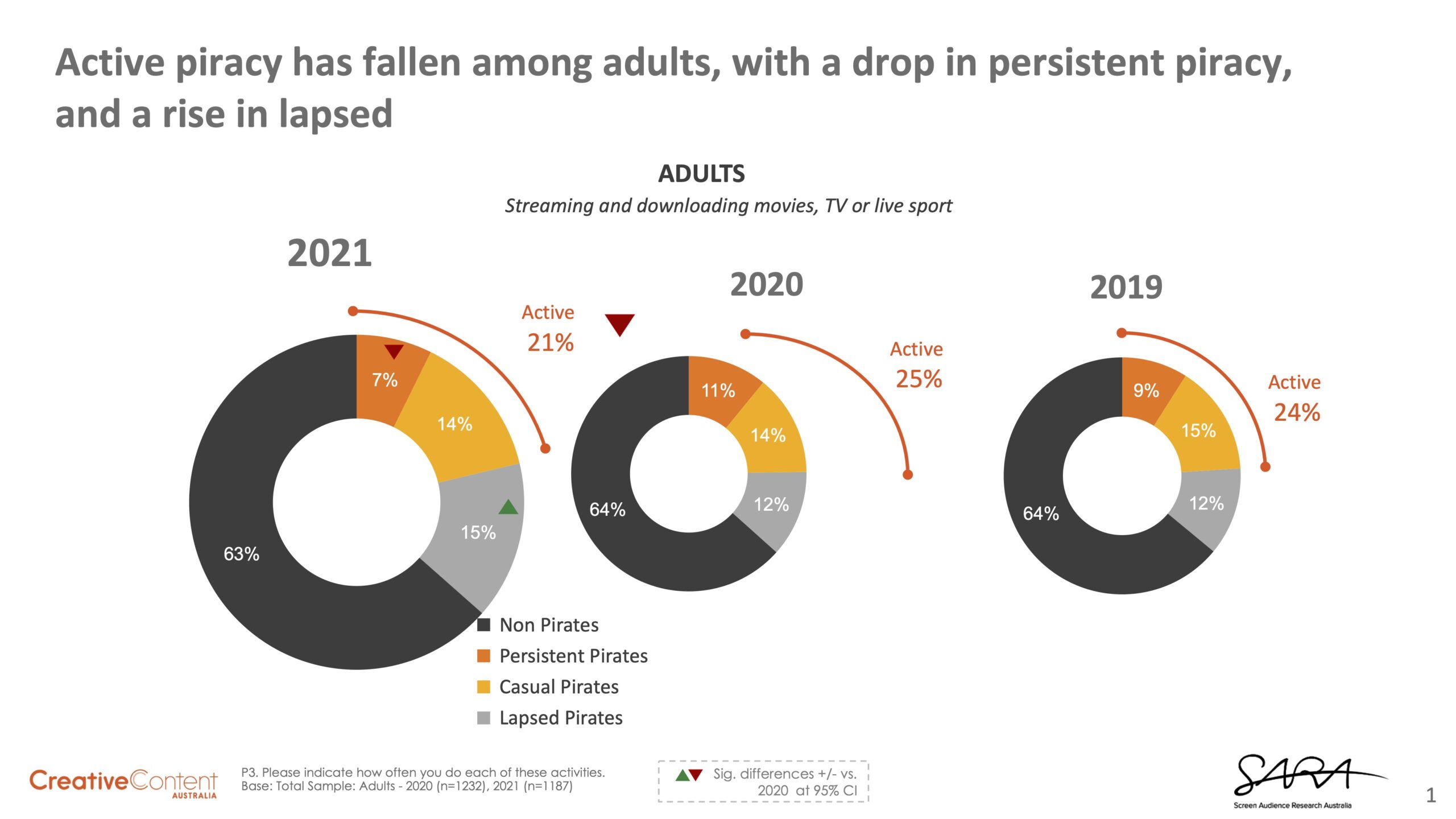 The boom in viewing during the pandemic, particularly on streaming services, is well documented. Globally we watched more as we distanced and isolated. We watched more news, more sport, more movies and TV shows. In Europe Netflix, Disney and YouTube needed to temporarily throttle their streams to maintain the bandwidth put under strain by the additional demand. The CCA research showed Australians were well aware of how their behaviour was changing with more than a third of adults and over half of all teens saying that they were streaming and downloading content more often during the pandemic.

The pandemic has certainly afforded the physical opportunity to view content with a higher degree of frequency. People have been at home, teens have not been in school and opportunities for other forms of socialising have been limited. There has also been unprecedented access to quality content on a range of platforms and in times of isolation, TV content fulfilled a social need within the household and on social media and provided a much-needed sense of connection with others. A study from the UK showed that during the pandemic there was more companionship in viewing behaviours and more regular family viewing occasions over this period.

Motivation to perform any behaviour involves a competition between alternative behaviours. The increased opportunity and motivation to view legally has involved a decreased motivation for viewing illegally. In this study, pirates say they are pirating less often and the main reason given for the reduction in piracy frequency was the ample opportunity to view via legal alternatives (59% of adults and 58% of teens). 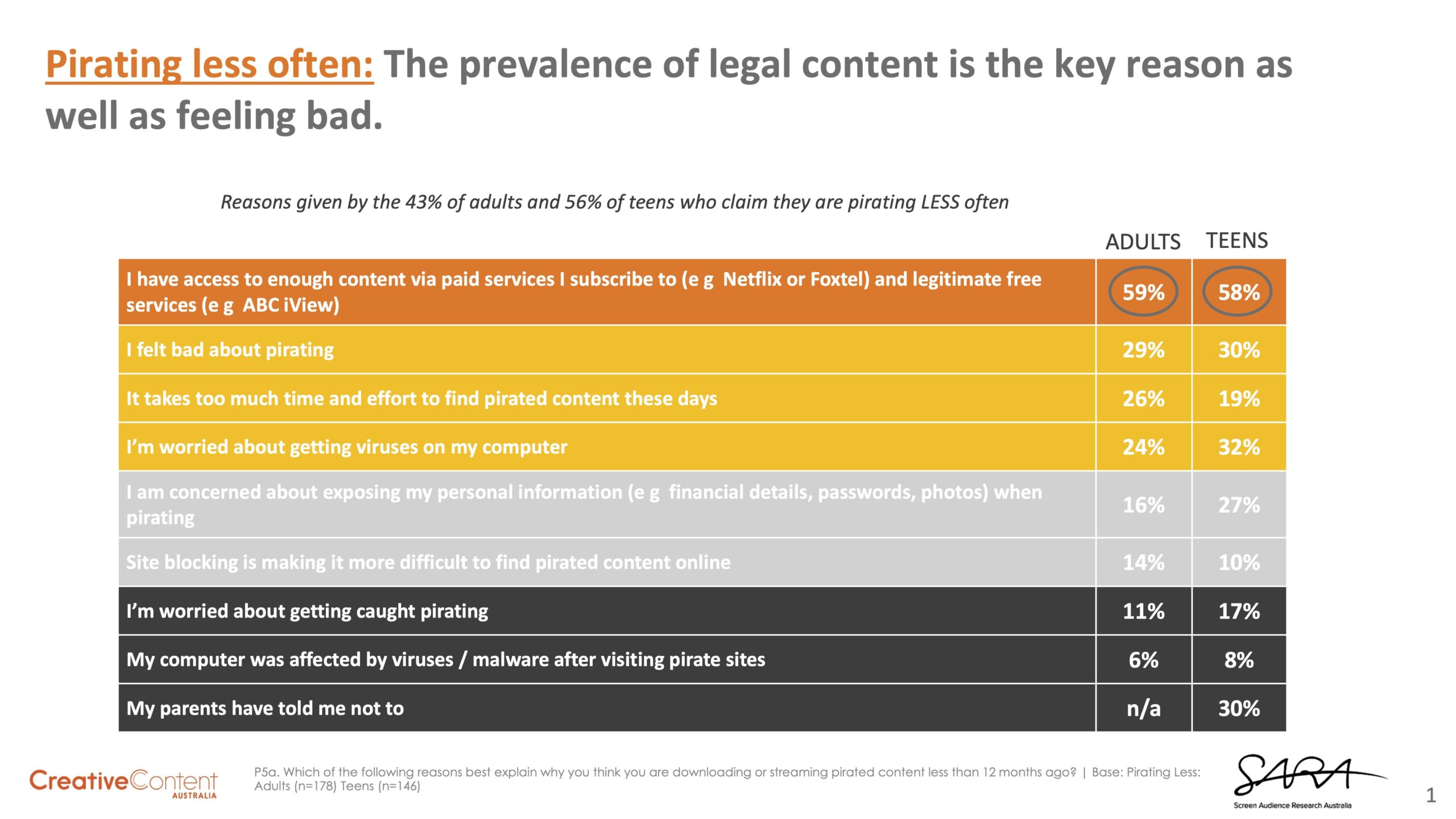 In addition, piracy has become more difficult, and indeed risky, to enact. Site blocking continues to be a successful obstacle to piracy, with nearly half of all active pirates having experienced a blocked site. Whilst some will continue to search for illegal content on encountering a block, a third either turn to a legal source or another activity. Pirates also report experiences of malware or viruses as a direct result of piracy, with a quarter of the most frequent adult pirates having lost or exposed their personal information through piracy. Unsurprisingly almost one in three cite cyber security risks as a reason for limiting their piracy activity.  For teen pirates, half admit exposure to ‘age inappropriate content’ through piracy. Piracy is certainly not as attractive an option as it has been in the past. 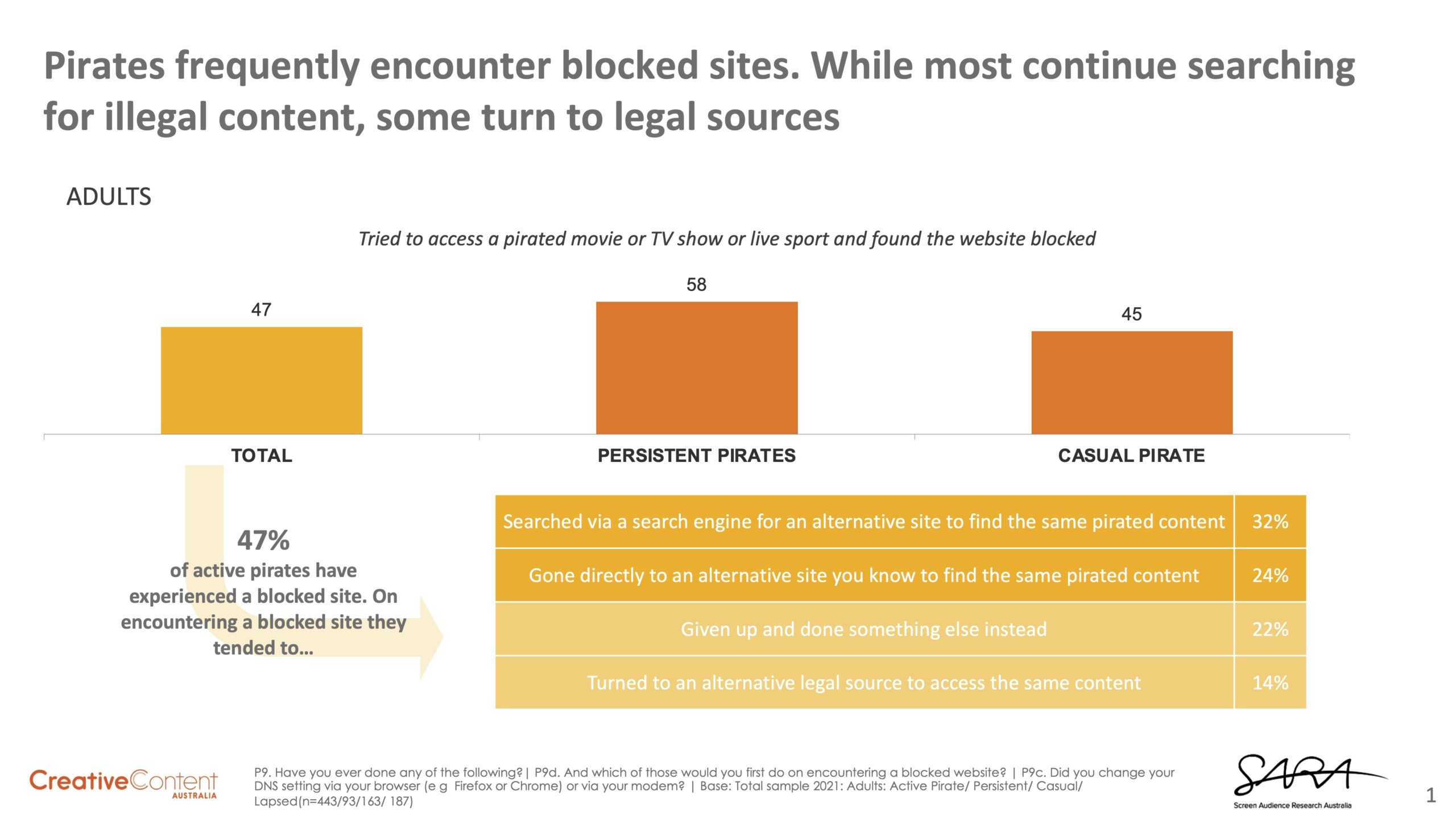 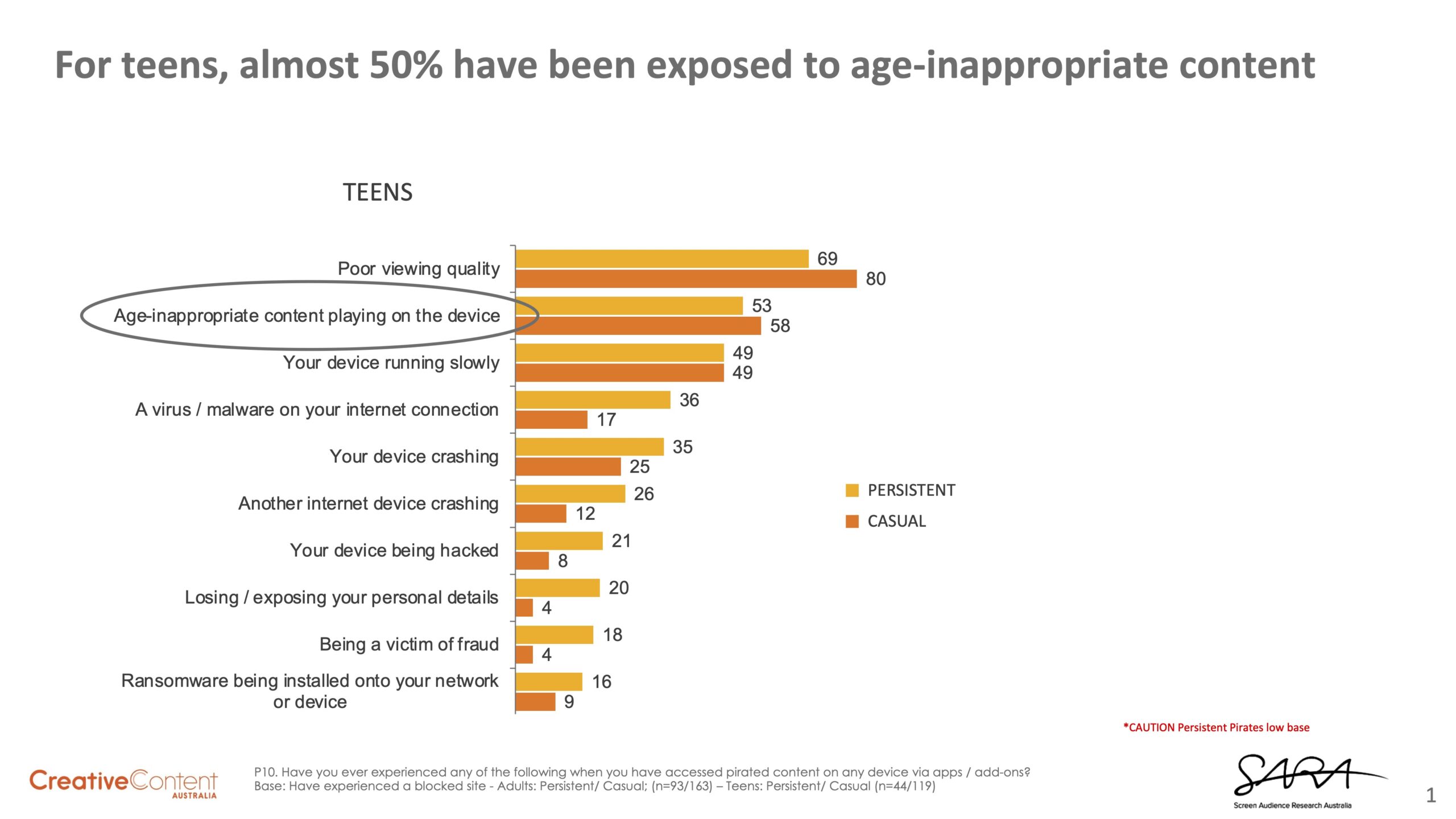 The social acceptability of piracy also seems to be under pressure. Those that see piracy as the perceived social norm is at an historic low point (just 29% of adults and 37% of teens). Certainly most pirates don’t label themselves as pirates (over 65% of all active pirates deny that is what they are), and almost a third of those who are pirating less often state that a driving factor is that they ‘feel bad’ about the activity. We have seen for many years in the data collected that piracy is generally considered to be a form of stealing or theft, an opinion held by the majority of adult and teen pirates. However, a new question in the 2021 study showed that whilst the source of piracy content has not entered the thoughts of viewers, once made salient, it has the potential to destabilise and disrupt. The majority of active pirates concerned by the fact that pirated content benefits serious global criminal syndicates claim intent to reduce their piracy behaviour as a result.

So, the situation is largely positive. But now is not the time for complacency. In a post pandemic world we are already seeing some new behavioural shifts which are concerning if not surprising. The 2021 study revealed a fall in the number of subscription services to which Australians subscribe with Netflix appearing to take the biggest hit (from 53% in 2020 to 45% in 2021). At the time of writing, the media is rife with news of shrinking subscriptions to Netflix around the world.  This might be a response to the increasing cost of living but also suggests a consumer that is overwhelmed by choice.

Life is getting back to what we once knew for many different activities. It is not inconceivable that viewing through illegal channels becomes a familiar pastime for those who reduced their piracy behaviours when viewing in a different environmental and social context during the pandemic. The industry needs to remain alert and continue to monitor the viewing behaviour of Australian pirates. As pre-pandemic patterns of life return, those with a taste for piracy may too settle back into life as it used to be.

Anna Meadows has over 20 years of multinational experience in advertising, market research, marketing and behavioural science consultancy. Anna has worked with some of the world’s largest companies devising and implementing large qual and quant research projects and developing communications strategies for their many brands. Anna lived and worked in APAC from 2000-2017 as Client Service Director at Lowe Advertising in Australia and then as Director and Head of Qualitative at Millward Brown Firefly and founder of Sycamore Research in Singapore. She is now based in the UK (Cambridge) and works between markets. Anna has a Master’s degree in Behavioural Science from the London School of Economics, is a Qualified Practitioner of Market Research with the Australian Social and Market Research Society and a member of The Association for Business Psychology. Anna’s focus is in the analysis of consumer behaviour and applied behavioural science.